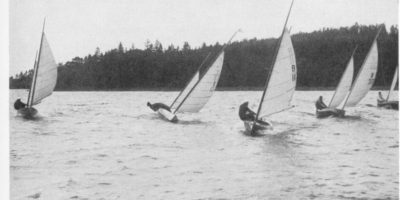 In a previous post (Zenith’s history, now a little clearer or less muddier) I stated that Richard Pershouse was Zenith‘s first recorded owner in 1935 and that I was assuming that Zenith was imported from Sweden at some point before 1931.

In that post I also showed links between the International Canoe stalwarts of Roger de Quincey and Uffa Fox, and Richard Pershouse. Roger de Quincey and R.H.Pershouse (I think this is Robert, Richard Pershouse’s father) set up the first Tumlare fleet (supported by Uffa Fox) at Aldeburgh in 1935, as according to http://www.tumlare.org.uk/history.html:
“The British fleet was kick-started by Uffa Fox who cajoled a group of sailors to order six which were delivered to the Aldeburgh Boatyard in 1935.
– 25 Zest, for Roger de Quincey
– 26 Jill, for R.H.Pershouse
– 27 Zara, for G.C. Pritt
– 28 Vanda, for Col .Franklin-
– 29 Edith, for Graham Goodson
– 30 Alert, for Sir Ernest Roney“

At the time I thought this was interesting information and I’d found the name of one of Zenith’s early owners. However, when recently perusing the classified adverts in the April 2021 Edition of Classic Boat Magazine I noticed this advert for Zest, Roger de Quincey’s boat:

I hadn’t appreciated that the Aldeburgh Tumlares had been built in Sweden in 1935.

A quick web search of Tumlares for sale resulted in this listing for Jill, Robert Pershouse’s yacht, on the Demon Yachts website.

The brokerage listing has this important information about Jill

‘Jill’ is Tumlare no. 26, and is one of the batch of six Tumlaren that were the first of their class to come the UK, arriving at the Aldeburgh Yacht Club in 1935

‘Jill’ was built in Sweden to a high standard in Hjalmar Johannsen’s yard in Gothenburg in 1935 using only very fine materials, and to illustrate this, to date none of her mahogany planking has needed to be replaced.

The Tumlare Owners Group states that the British fleet was kick-started by Uffa Fox who cajoled a group of sailors to order six which were delivered to the Aldeburgh Boatyard in 1935, but I’d not realised that the boats were built in Sweden.

It is interesting that Uffa Fox is the main protagonist in having the fleet imported from Sweden. It must be assumed that Uffa had seen the Tumlare, though the only evidence of a trip to Sweden is in 1930 in the voyage were he sailed Vigilant to race in the Royal Swedish Yacht Club Centenary Races at Stockholm.

June Dixon in ‘Uffa Fox A Personal Biography’ when recounting the trip to Stockholm states that Vigilant finished last in the first race and finished outside of the first three places in the subsequent races. Maybe Uffa was impressed by the quality of design and performance of the other competing yachts as he certainly later admired the Reimers designed Tumlare. In the short chapter on de Quincey’s Zest in Uffa Fox’s Second Book Uffa writes

Zest is a very advanced type of cruiser, in fact, I think she is the most advanced in the world….

I suspect that Uffa visited Sweden subsequent to the voyage in 1930 and was looking at yacht design, construction and equipment as shown by this line in the Second Book

For Uffa to actively promote the Tumlare as an ideal boat for Aldeburgh sailors, including his friend Roger de Quincey, he may have seen the boat in 1933 or 1934 in Sweden to have gained such a positive opinion. He must have known Knud Reimers as Reimers allowed the publication of the Tumlare lines plans in the Second Book.

The two designers have produced similar boats, Vigilant was built in 1930, and is based on the 22 Square Metre Skerry Cruiser rules. The Knud Reimers Tumlare design from 1933 is also derived from the faster Square Metre or Skerry racing yachts of that time. It does not seem unreasonable to think that the two designers knew each other and Uffa had made several visits to Sweden.

So, whilst this is interesting information, with a smattering of supposition, what does it have to do with Zenith?

I suspect that Roger de Quincey and possibly Robert Pershouse may have visited Sweden 1934/5 in advance of the Tumlare fleet being shipped to Aldeburgh. When in Gothenburg arranging the building of Zest et al they possibly came across a Swedish IIIB sailing canoe and realised that was very similar to a RCC ‘B’ Class and had it shipped over to Aldeburgh with the Tumlare fleet in 1935. This boat ended up with Robert’s son, Richard Perhouse.

Obviously this is only circumstantial evidence of how Zenith arrived in the UK in 1935, but it does seem a sensible scenario.