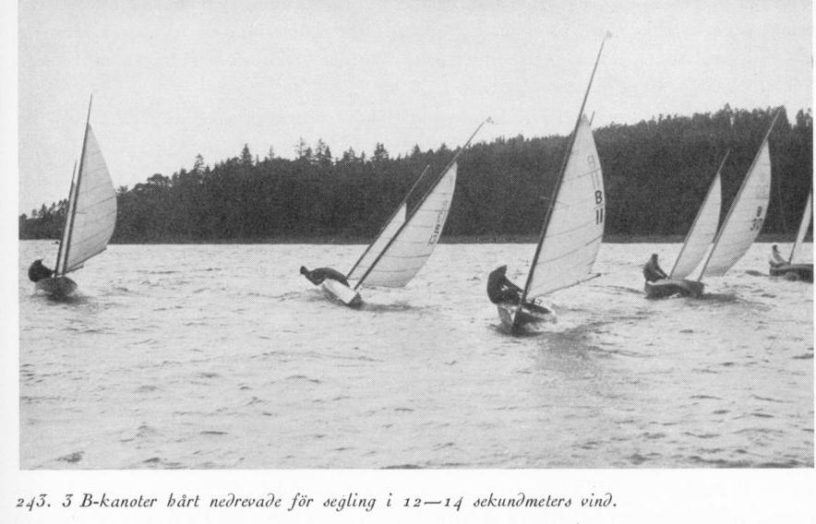 As I wrote in the Useful Sailing Canoe links I don’t want to replicate the history of Sailing Canoe development as there’s plenty of information out there already. However, I have spent some time looking at the issue of Zenith being a Swedish ‘B’ Class canoe whilst also meeting the requirements of the Royal Canoe Club (RCC) ‘B’ Class specification.

Some background to the International Rule

It should be noted that that in the early part of the Twentieth Century there were a number of different Class Rules, both at a National and a local level, with examples including:

In his history of the International Canoe, Andrew Eastwood states:

In 1959 Uffa Fox Wrote in Sailing Boats about the trip that he and Roger de Quincey took to the US in 1933 (text available from http://www.intcanoe.org/en/dca_index.php)

Some twenty-five years ago, I entered the canoeing field and at the Royal Canoe Club’s Annual Meet won the two most important trophies, the Challenge and the De Quincy Cups. For the first time I introduced the deep chested V-d type of planing hull into the canoe world. The following year, 1933, I went with Roger de Quincy, a keen young canoe sailor, still at Oxford, across the Atlantic in the old Empress of Britain with two canoes: Roger’s Valiant and my East Anglian, both sister ships. We were trying to bring back the ‘New York Canoe Club International Trophy’, the two Canoe Championship Cups of America as well as some of their other trophies.

The American canoe rules at this time were different from those of Britain. We had the disadvantage of building a canoe to fit both the British and the American rules, but in spite of this, we hoped that our planing lines would give us such superiority that we should be successful with our challenge

After this we went south to Long Island Sound, and here, by winning two races out of three, we won the New York Canoe Club’s International Trophy. This was the first time that this trophy left American shores, though it had been raced for since 1886. Although such eminent canoeists as W. Baden Powell and W. A. Stewart had challenged for it America had, until 1933, defeated all comers. Having shown that a boat could be designed to two distinct rules, and still win, we had meetings with the Americans asking them to change some of their rules on condition that the Royal Canoe Club of Britain changed some of theirs so that we could have an International Rule for canoes all over the world.

These meetings resulted in the first iteration of the International Rule

Fortunately, the Americans saw the wisdom of this argument, and we soon roughed out a rule which would develop a wonderful canoe. We chose the best points of the American, Swedish and British rules to make this new International Rule, and when we brought this to England the Royal Canoe and Humber Yawl Clubs approved, with a few minor alterations. So Roger and I, as well as winning all the important canoe trophies of America, brought about an International Canoe rule which has remained in force and given great international sport from then to this day.

The 1936 International Rule states that:

Hull. Sharp at each end and the curve of a line along the outside of the gunwale or along the line of greatest beam wherever found shall be a fair curve. The angle of the bow and the stern as seen from above shall not exceed 90 degrees. The outline of any cross section from the gunwale to keel shall not be less than a radius of 3 inches. Sheer to be a continuous concave curve.

Subsequent iterations of the Rule can be found at Intcanoe.org, where the 2009 Rule and the current rules published in 2017 are available.

Whilst a number of the historical rules that predate the 1936 International Rule are available online (The American Canoe Associations (ASA) Canoes, American 16-30 Sailing Canoes, Royal Canoe Club (RCC) A and B Class Canoes (1910) and Clyde Canoe Club Canoe specifications (1909)), it has proven interesting trying to establish the definitive Swedish Canoe rules.

This information is useful, but potentially confusing . Zenith had been recorded by the UK International Canoe Class Association as being a Swedish ‘B’ Class canoe but considering that the ‘B’ Class was only introduced in 1968, and is considerably smaller then Zenith it was obvious that something was wrong somewhere. Zenith is narrower than a ‘C’ Class, as she has a beam of 1.1m, as opposed to the C Class minimum beam of 1.3m.

A popular type as early as the 20th century was a further development called III B, whose width now increased to a full 1.10 meters … Designer was often A H Rosengren, and many copies built. His construction was so common that it became as well known as short and good “Rosengrenare.”

Another well-known designer was Albert Magnusson from Karlstad. Beyondracing sailing was a lot of spectacular long trips with these during the 1920s and 30s. These canoes during this era lacked all the suspension boards on which the helmsman could move out the whole its weight more in praise. It became to hang over the edge of the praise at the knees, at its most horrific.

Hanging boards came first in the 40s and made sailing most efficient.

In the early 1920s came the D-canoe. It was 6 meters long, 1.3 meters wide and was, as I said, loaded with some 100 kg lead. The type won appreciation as a long-distance canoe and carried 13 sqm seal. Both slip and canoe triggers could occur, which is why the types were designated as

Class V, A and resp. B, depending on rig design. In 1931 it was time to see the C-canoe born. There was a development of the III B: in so far as the width increased to 1.3 meters and the hull got better space. This came to be the very one most popular type and was built in the largest number. In this class also happened the fastest

When searching for more information on the Swedish IIIB rule I came across two articles attributed to Sven Thorell in the canoe history section of www.kayakdesign.org:

The Class Division of the Swedish Canoes Association (which I believe dates from around 1915) gives the following classes:

The Canoes article by Thorell gives some excellent background into early days of sailing canoes in Sweden (again, apologies for the automatic translation)

After a series of drawings of English and American canoes were published in »Nordiskt Idrottslif» in 1902, canoe drawing got a push forward. Our first canoe designer in “recent” times was engineer AH Rosengren, which in the early 19th century built a large sailing canoe, 5.0 X 1.0 m and with about 9 sqm sails.

The strange thing about this canoe was that it was built with a whole board that was cloth-covered, a construction method that then became revolutionary for the Swedish canoe building business. Namely, it was excellent for amateur construction, thanks to the fact that the boarding work itself did not have to be done so carefully, as it was the canvas that made the canoe tight.

This fact, that anyone could build their own canoe, has since left its mark on the entire Swedish canoe building business, because most sailing canoes in Sweden are built by the owners themselves. a construction method that later became revolutionary for the Swedish canoe building business. Namely, it was excellent for amateur construction, thanks to the fact that the boarding work itself did not have to be done so carefully, as it was the canvas that made the canoe tight.

…..they started by building sailable paddle canoes and a few smaller sail canoes in Rosengren’s manner, but pretty soon it was found that within class (1) 3 B’s dimensions, 5.20 X 1.10 m and with 10 sqm of sailing area, had found a good sailing canoe. This class thus aroused great interest and lots of constructions have seen today’s

…..The most active designers have been Erik Nilsson, G. Högborg, A. Magnusson and the undersigned. As a rule, all these canoes were built by the owners themselves and most have been excellently well built and equipped with a lot of features. Around 1915, the marconi, or as it is also called, the Bermuda rig began to be used and of course the masts were hollow. To take advantage of the rule, the masts were made crooked, for if the bay was not greater than 1/50 of the length of the corpse, the surface outside the straight line was not measured. Spirit until 1924, wire stays were used on the “mainmast”, but this year a canoe, designed by Magnusson, appeared with completely unstayed masts and this canoe turned out to be quite superior to the others. The reason for this was, of course, that the rig thus obtained a certain suspension, whereby the canoe had smoother movements and easier passage through the water. The shape was also significantly changed by the same designer, so that the least possible resistance was obtained in the water.

Magnusson’s types in class 3 B are now almost the only ones who participate in races in this class. with completely untamed masts and this canoe turned out to be the others quite superior. The reason for this was, of course, that the rig thus obtained a certain suspension, whereby the canoe had smoother movements and easier passage through the water.

There are several key points here, relevant to defining the age of Zenith

So, the confusion about the modern ‘B’ Class rule and the pre-1931 ‘B’ class rule has been addressed, Zenith is a IIIB design and built before 1924 as the Magnusson designed IIIBs were the only boats being built after this date.

We know that Zenith was registered as International Canoe in 1935 as apparently she qualified as RCC ‘B’ Class canoe.

The salient points, applying to the RCC ‘B’ Class from these rules are:

Rule 23: A cruising canoe, to be classified for racing purposes shall be sharp at each end, with no transom or flat stern. Any metal keel, centreplate, or ballast shall be detachable from her, and any ‘bucket well’ fitted within the sleeping compartment shall be detachable.

If Zenith was registered in 1935 as an International Canoe because she complied with the rule it could be expected that someone had measured her against the then current (1928) RCC ‘B’ Class rule.

Whilst she complies with the prescribed length, at exactly 17′ (5.181m), her beam is 1.09m, just over the 3’6″ (1.067m) as laid down by the 1928 rule. It was suggested by Ron Head (who took the photo of Zenith in 1953), when I spoke to him just after I took custodianship of Zenith, that as there were so few International Canoes sailing in the 1930s Zenith was invited to join the fleet to increase numbers. This seems a sensible scenario and the 23mm extra beam was ignored.

Reviewing the RCC ‘B’ Class rules has solved one mystery. There are two 1/4″ bulkheads fitted (5’1″ from the stern and 4′ 6″ from the bow). These are clearly a later addition as there are numerous screws that go through the hull into the bulkhead frame, and the quality of the timber used is below that of the rest of the hull. It would appear that these were added as a way of complying with the 1928 RCC ‘B’ Class rule that states “There shall be two transverse bulkheads of wood on each side of mid-length, but not within 3 feet (914mm) of either end of the canoe“