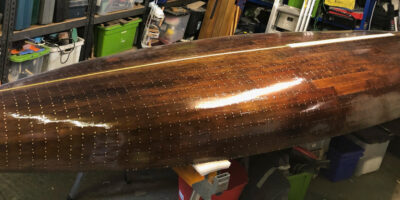 A couple of years ago I was able to buy this rather wide double stacker trailer. I found it via Facebook Marketplace and it turns out that it’s previous owner was Ben Ainslie Racing. The team bough a a pair of Daz Cats for chase boats for their America’s Cup campaign and the boats came on this trailer. This was surplus to requirements as the the boats were loaded into a container at Portsmouth to go to Bermuda and the trailer driven to the home of one of the crew in Devon to be disposed of. I was fortunate to see the advert pop up on Facebook and bought the trailer for not a lot of money.

The extra wide trailer was a big help as my other boat, a Harrier +, is 6’6″ wide, and has can been seen below fits snuggly onto the trailer.

With work progressing nicely on Zenith I got thinking about a launching trolley for her, and given that she is 17′ long I’d need a minimum of a 275 trolley. A wanted Ad on a couple of FaceBook groups resulted in a trip to Swanage to collect a galvanised trolley previous used for a 505, bought for £40. The width of the trolley is not going to be problem, given the capacious trailer it will be siting on .

The trolley was old, but solid. It had the gun-whale supports for the 505 and a hull support towards the bow

5 minutes saw the supports removed, ready to build a fit both a rear and front cradles to the trolley. I wanted to form a pair of cradles so the hull fitted snugly on the trolley. The remaining trolley from the rear supports would provide fixing points for the new cradle.

A visit to Trago Mills saw 3 Astrotruf door mats being purchased for the sum of £7.50, an ideal material for the hull to rest on as it should prevent water and grit being trapped between the hull and the cradle. The Astroturf was cut roughly to shape of the finished cradle and I padded the out with a couple of old towels to make the cradles slightly over sized.

As the cradles would be made from glass-fibre I used some thick plastic to laminate onto and applied a suitable coat of release wax.

Once the release wax and dried a white gel coat was applied and left to cure before several layers of chopped strand mat laminated.

With the glass-fibre cured is was then just a case of fitting the ply wood cradle sides and using glass-fibre tape to the fix them to the laminated cradle.

The same process was sued for the front cradle.

And here’s the finished trolley. I reckon the total costs, including a new pair of tyres is around £100. It is never going to the lightest of trolleys, but it will provide lots of support for the hull and fit on my existing trailer.